Portland, OR -- The Ultimate Tour Named Death, the name of the 2019 tour by Swedish metal band Ghost, made a stop at the Moda Center on September 16th. The night featured more than just heavy metal music.

Since its inception, Ghost has been known for theatrical performances. Lead singer Tobias Forge even dons costumes and full personas based on clergy-like characters that make up his “unholy priesthood.”

Along with his “Nameless Ghouls,” the affectionate name given to his masked bandmates, Forge’s group accomplishes more in a live show than just musical performance.

The Nameless Ghouls wear all-black outfits and masks that change with each new incarnation of the frontman.

The character performances lean into their satanic doom metal and create an underworldly experience that would have even your grandma screaming in the name of Asmodeus.

Forge donned his current and fourth incarnation of the unholy priesthood, Cardinal Copia. Papa Emeritus III, his third character, relinquished his reign at the head of the band in a video Ghost released in April of 2018.

This was the third stop on the North American leg of the tour, which has been highly anticipated by the band's ever-expanding fanbase. Ghost's success is not by chance.

Ghost, originally Ghost B.C, formed in Linköping, Sweden, in 2006 and right away started hammering out their immense stage presence and the foundation of their ungodly theme.

Centered around death, the Devil, and sex, Ghost has a way of bringing even the most devout to their knees, pleading for more.

In an interview with Rolling Stone, one of the Nameless Ghouls explained their theme saying "We are dabbling with mankind and his or her relationship to God."

Don't let their theatrics or masks fool you; this is no farce. Though intentionally campy at times, Ghost uses its mystery as a vehicle for the music, and it absolutely delivers.

The Nameless Ghouls are a perfect representation of that guise.

In the interview, the Ghoul explained the reason for their anonymity, "The reason for us doing this band the way we chose to do it was so that there would not be any focus on us as individuals."

By 2013 Ghost had a massive following. -- so much so that the band even worked alongside Dave Grohl for their EP, If You Have Ghost. Grohl has even been rumored to have joined the fold as a Nameless Ghoul, in some capacity, at least.

In that same Rolling Stone interview, when asked if Grohl has ever played with Ghost, the Nameless Ghoul had a veiled response saying, "Well, we can’t really know, can we? I can tell you this much: He has played Ghost material in a ghoul suit. And he might or might not have [performed onstage], and he might or might not in the future.

“How’s that for a commercial cliffhanger?”

It’s because of stories like this that I myself wondered during Ghost’s performance if Grohl might be up there onstage, hidden behind a mask and hammering on the drums.

Even the identity of Ghost’s frontman was unknown to the world at large until a 2017 lawsuit over royalties was filed by one of the former Nameless Ghouls, revealing Forge’s name in court documents. Forge initially won the lawsuit, but an appeal has been granted for next year, Loudwire reported last week.

Though the reveal took away from the overall mystery, the hard work of Ghost in creating such elaborate papal imagery and anonymity still creates the illusion that anyone could be on the stage.

Which leads us to September 16th's show.

The group’s set was intense. Hawkins was animalistic, crawling across the stage, pounding the ground, spinning and flailing his body while screaming their heavier songs.

On Spotify the band is described as, “Employing a powerful blend of twisty progressive rock, explosive heavy metal ... hard-hitting, forward-thinking San Antonio quartet Nothing More invokes names like System Of A Down, Thirty Seconds to Mars, Incubus, The Mars Volta, and Killswitch Engage."

Two songs that stood out during their set include their song dedicated to people who have lost a parent, "Fade in/Fade Out", and their hit "Jenny,” which has more than 30 million plays on Spotify. During the middle of their set, they pulled out a steel guitar, and had three members play it together.

During the group’s last song, Hawkin's jumped onto a platform-instrument with all sorts of gadgets dubbed "The Scorpion Tail" and played a mash-up of Skrillex's "First of the Year" mixed with "We Will Rock You" by Queen.

After a brief intermission, the curtains were lifted and Ghost’s elaborate cathedral of the Dark Lord could be seen. The backdrop of their set was designed to look like massive panes of stained glass. Each of the three panes contained highly detailed images of the past characters Forge played in previous albums. 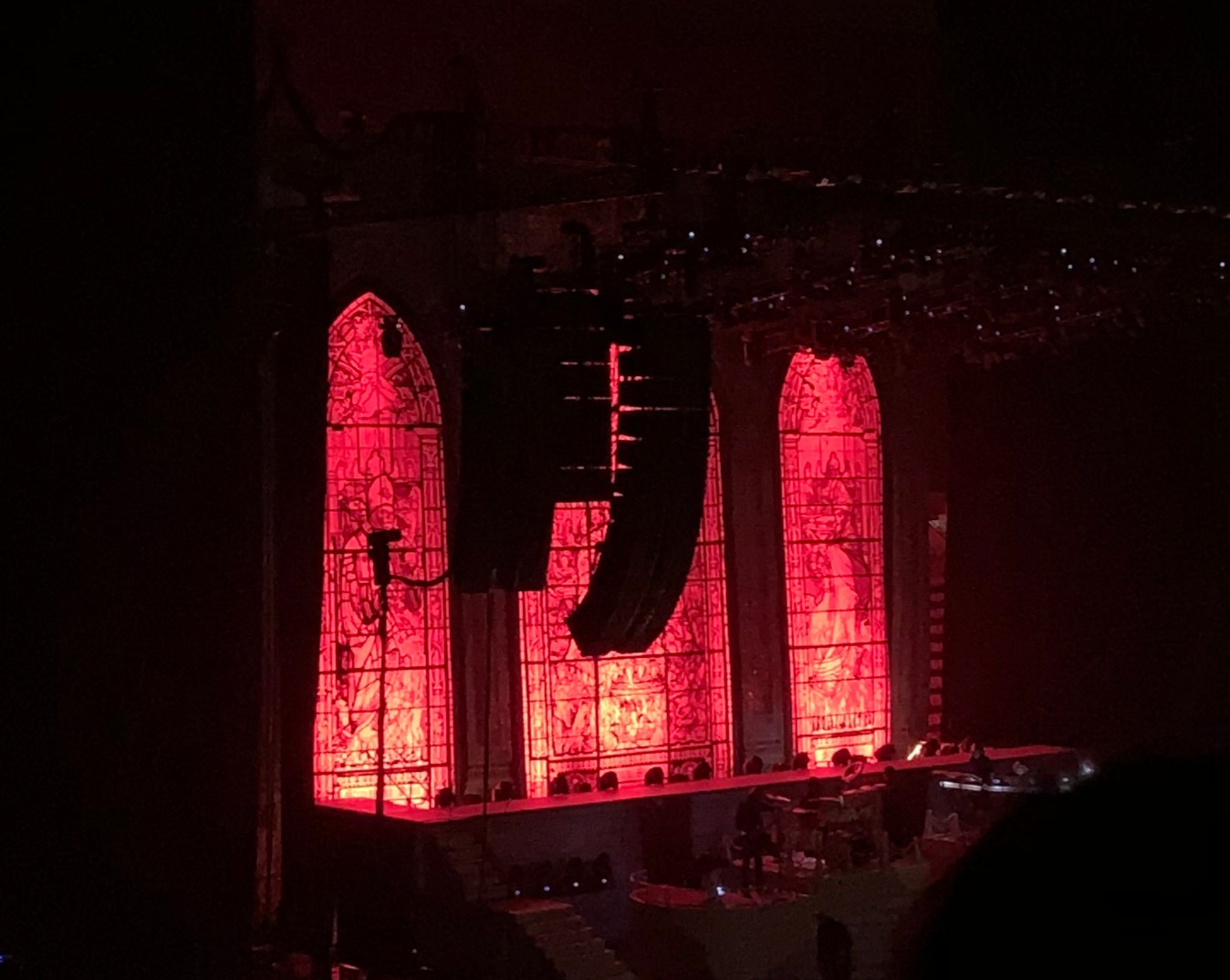 The moment they hit the stage, the entire Moda Center buzzed with excitement. First was "Ashes"- a creepy nursery rhyme interlude that seamlessly transitioned into their hit song "Rats.”

Cardinal Copia (Tobias Forge) started the night off in an immaculately tailored red suit with tails, donned in his white makeup with blackened eyes, and slicked back hair. His performance was drenched with sexual energy, thrusting and grinding to the audience during the more explicit parts of the band's songs.

His previous characters, like Papa Emeritus, were far less sexual, playing more to the ceremonial, pope-like persona that previous iterations of the priesthood were centered around.

The different tact with Forge's Cardinal character is perhaps a fitting artistic commentary considering the recent implication of some Catholic Cardinals, like Theodore McCarrick early this year, in covering up the church's sexual abuse scandals.

Throughout the night, Forge changed into a black suit that was near identical to the red, then a white suit and black hat that he came out in while riding a tricycle, along with his more traditional black priest’s gown and signature hat. The outfit changes made for a dynamic, ever-changing experience that is a good fit for a band so concentrated on stage presence.

"Portland!" Forge often yelled, connecting to the audience many times throughout the night, making the show feel personal.

His electrifying voice pierced through the arena, as he slid across the stage with swagger and otherworldly confidence. The whole time the Nameless Ghouls and Cardinal Copia were playfully interacting with each other. You can tell they truly enjoy what they do -- not just in stage presence, but in the power they put behind playing each song.

The ability to combine a multitude of genres makes Ghost almost uncategorizable.

Many of their tracks incorporate elements of pop, which often give way to somber instrumental fills. In the song "Helvetesfönster,” for example, the keyboard and guitar come together to create a modern twist on what feels like a Medieval or Renaissance composition, yet it keeps their darkness a central component. Many of their songs play to this strength.

In the interview with Rolling Stone, the Nameless Ghoul described their sound saying, "We grew up listening to a lot of different music. A lot of Swedish music, and also a lot of Sixties and Seventies bands – AOR (album-oriented rock) things like Kansas and Yes and Chicago and Boston. Journey. Toto. Professional-sounding music. And with all of that we found a way, for us at least, to make sense of having an extreme-metal riff and then throwing a pop melody over it."

Even with their pop flare and turn of the century inspiration, you cannot deny that their heaviness and downright blasphemous lyrics hit hard. In "Ritual", a song about creating the antichrist, they playfully change an old prayer to fit their satanic needs,

Who art in hell unhallowed be thy name

Cursed be the sons and daughters

Of thine nemesis whom are to blame

Or, a personal favorite from the song "Year Zero", which is one of their heaviest songs from the set, in which they sing like a devilish choir.

Equal as parasites and moving without eyes"

Forge also sings in the song, "Hail Satan, Archangelo," which is the most metal thing ever.

Honestly, if you saw them live and didn't want to throw yourself at the feet of the Devil then nothing will.

"When I say taints, you say tickled" -- Cardinal Copia

Near the end, the Cardinal began a back and forth with the audience, asking if the crowds asses were properly “rumbled,” and asking if our “taints were tickled.” He started a call and response with the audience saying, "when I say taints, you say tickled."

Overall, their show was as exciting as it was haunting. They put on a show unlike anything I have ever seen. Between songs that propelled them to become a Grammy Award-winning band and a live presence that is equally deserving of an award, The Ultimate Tour Named Death was a fulfilling night of music.

This was truly a performance fit for the dark prince.

If you would like to listen to the setlist from the show, we have collected the songs in a Spotify playlist which can be located here.

Mary on a Cross

From the Pinnacle to the Pit